So I finally got myself a clean Windows 10 VM for the next couple of years development, installed Visual Studio 2015, downloaded OpenCV, migrated my VS2013 OpenCV C++ test app, and.. and.. of course it didn’t work 😦

This was only an issue because I was using the static OpenCV libraries rather than the pre-built binaries. It looks like VS2015 is quite happy using the VC12 OpenCV binaries.

The current release of OpenCV 3.0.0 (04/06/2015) comes with pre-built static and import libraries for VS2013 and VS2010, but not for VS2015. I found an excellent article on the Colorado School of Mines (!) WebSite on how to build VS2015 libraries. But I needed some other tweaks beyond a basic build of OpenCV. So the goal of this note is to show how I built OpenCV for use with Visual Studio 2015 with the following configurations:

The basic procedure I’m using (after several iterations) is:

This assumes you have VS2015 and the latest Git for Windows.

The trick, at least for me, is to clone into a folder that will be used to keep the OpenCV source code. This folder won’t get deleted during the steps below. I’m also only interested in the official latest release, which at the time of writing is version 3.0.0.

Run a git bash shell (from any folder) and clone version 3.0.0. Note the use of forward slashes in both paths !

Here’s my bash session:
Now I have the following folder structure:

There isn’t a VS2015 solution bundled with the OpenCV download so you must create one. This is made easy by using CMake, a cross-platform build utility. Download and install from here – I used the Windows (Win32 Installer) ‘cmake-3.4.1-win32-x86.exe’, and kept the default installation options.

Create the VS2015 Solutions

The basic procedure with CMake is:

I’m going to place each solution in a unique build folder and will start with:

Run CMake and set the source code folder. Then choose a folder for the build. Make sure the build folder doesn’t already exist. E.g.

The click Configure, accept any request to create the build folder, and then choose the generator for the project. For x86:

The first pass at the configuration takes a minute or so and may download some IPPI files. It also ends up looking quite bad but the red items are just new values (which initially means everything):

Use the Search box to find and verify/update the following settings:

For example, to find and update the OpenCV_World option: 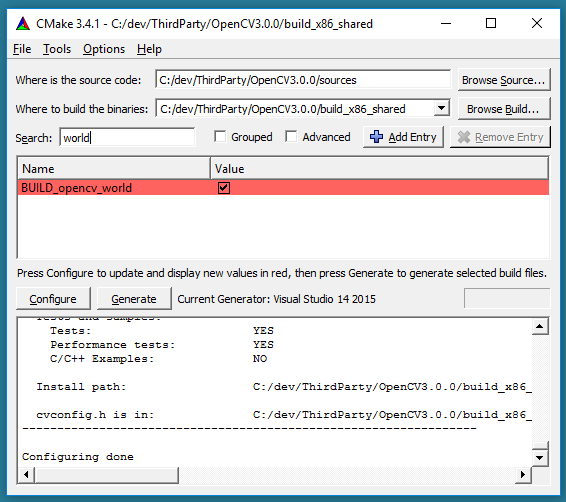 Click Generate. Then check you have a new VS2015 solution (but don’t open or build yet):

For the remaining 3 VS2015 solutions first change the build path, click Configure, apply the settings, and click Generate.

Close CMake and open VS2015, then open the x86 static solution:

Give it a minute or two for the parsing stage to complete, select the Debug|Win32 configuration, and build the solution.

I got the following output:

Next build the CMakeTargets/INSTALL project – this will put the output files in an install folder which we’ll use later on:

You can check you have the opencv_world300 debug DLL:

Now switch to the Release|Win32 configuration, build the solution, and build the CMakeTargets/INSTALL project. This will add the opencv_world release DLL to the install folder.

Now open the x64 shared solution and repeat the above to get the debug and release opencv_world300 DLLs. Note the configurations are:

Open the x86 static solution: before build we must fix a glitch with the PDB file names. For some reason the debug PDBs were not configured to have a d appended to the filename. This means the debug and release PDBs will all use the same filenames. For example:

There is probably a quick way to fix this using the CMake tools, but I don’t know how to ! Instead, do the following:

Repeat the above procedure for all projects in the following groups:

Is there a better way – I’m sure there is, but this is quite simple and quick and if it works then why not ? (One good reason to not use this approach is if you’re going to work on the OpenCV source code; using the C7 option takes away certain compiler and linker options that could make for much faster builds). There’s plenty of discussion on the web about this, for example on StackOverflow.

Repeat the previous build procedure to get the Debug and Release builds and INSTALLs done. Then repeat again for the x64 (remembering to modify the Debug Information Format settings first).

I want to replicate the folder structure of the official release of OpenCV as much as possible. So first, create a new build folder:

Then copy the contents of each of the install folders into the above build folder. Skip over duplicate files.

My final folder structure is around 1.2GB and looks like this

All four of the build_XXX folders can now be deleted – for me they take up around 10GB. Alternatively you can reload each solution, select Batch Build, Select All, then clean. This drops the folders down to around 2GB. For me I’m going to ZIP and archive them, in case I made a mistake !

One of my requirements is to make sure colleagues can work with these libraries, even if they use a different folder structure to me for their own projects. The only prerequisite is that there’s a ThirdParty\OpenCV3.0.0 folder; but ThirdParty can be anywhere.

My first trick is to make a User Macro in VS2015 to set the ThirdParty folder location. This is another example of something that could probably be done better, but I don’t want to change the system PATH and I need something simple. My reference for User Macros is from this MSDN page.

The macro can now be used in projects which may be distributed among other developers; each developer just needs to have their ThirdParty folder (with OpenCV3.0.0 inside) and this macro.

As an example, I have a 32-bit project using the static OpenCV library. The key settings are: 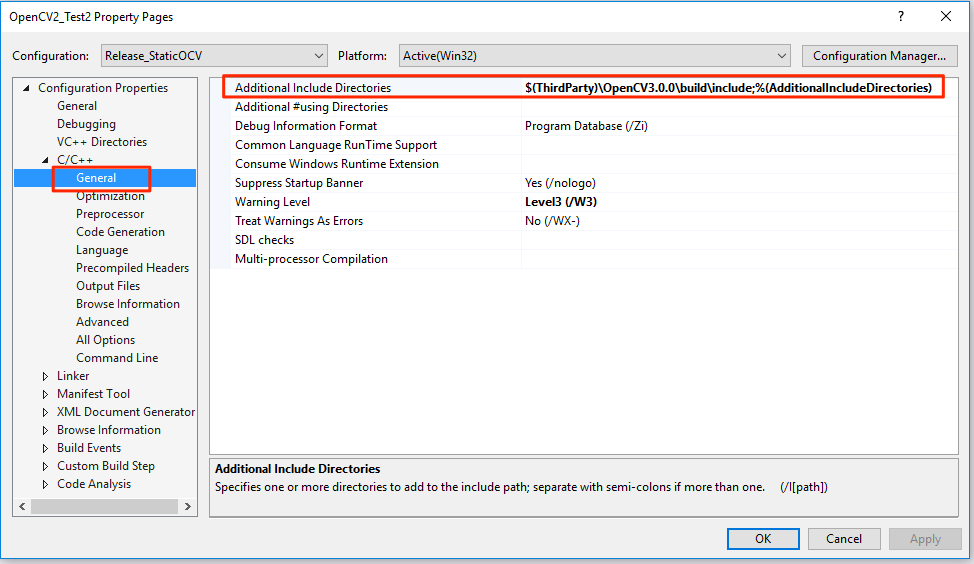 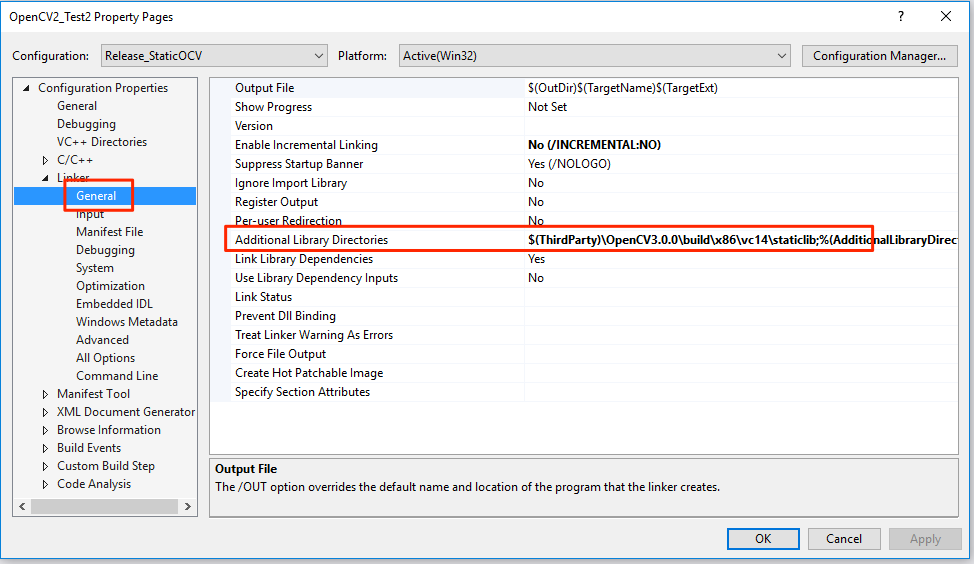 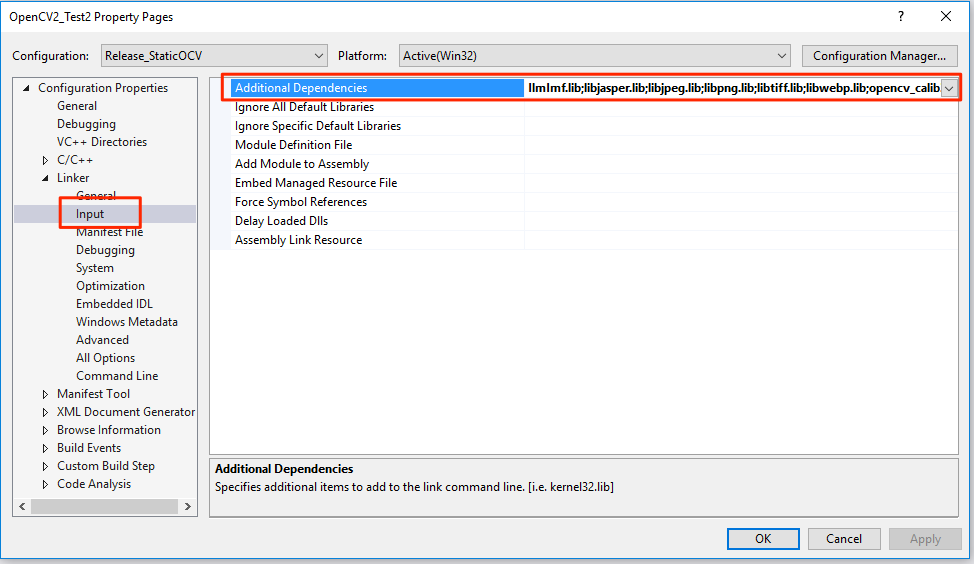 The list of dependencies for my Release build is:

And for my debug build it is:

To make sure it’s all looking good I build the Debug configuration and check there are no spurious errors or warnings. (For example, before I switched to the C7 debug-info setting I had all sorts of warnings about missing PDBs.)

Then try setting a breakpoint on some OpenCV code and stepping into it: if all goes well you’ll be able to step into and around the OpenCV source code.

Note: if you move your OpenCV distribution to another folder then the debugger will prompt you for the location of the OpenCV source files. This only happens once (as far as I can tell).

To use the DLL version of OpenCV change the following:

Note: if you run a shared DLL version without making the DLL available then you’ll get something like this:

‘The program can’t start because opencv_world300.dll is missing from your computer.’

To avoid changing the system PATH I added a post-build event to copy the DLL to my project’s output:

A good sample program to start with is Load and Display an Image, on the OpenCV website.

That’s it – I’m done ! After at least 10 variations of these builds, and two or three attempts to write up how I did it, I’m leaving it here.  At least until I figure a better way to do it, or an update is issued from OpenCV, or I figure out how to try and contribute directly to OpenCV, etc.  🙂