We’ve been using EasyCap USB video capture devices for a while now, but always with mixed results. The main problem has been trying to figure which version we have, which driver to use, and whether Windows 7 64-bit is supported. Then we found the official EzCap site which said that there were a lot of fake devices around.

We ordered a new unit directly from the EzCap site. At £19.99 it’s a lot more than most of the other EasyCap devices on Amazon, but it’s explicitly advertised as supporting XP, Vista (yuck!) and Windows 7 32- and 64-bit.

The box arrived this morning:

Inside is the device, CD-ROM and manual. 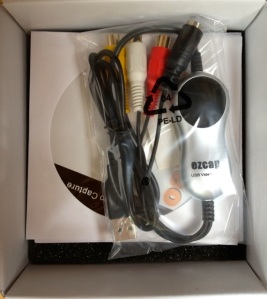 The other EasyCap devices connected directly into the USB port and were very clunky, usually preventing the use of adjacent USB port. This one is much better, with the device itself near the video cables and the USB on a longer lead:

So far I’ve done a quick install on XP (32-bit) and Windows 7 (64-bit) and it worked first time using AmCap. I only installed the drivers, not the bundled editing software.

So for (my) reference we have:

Found myself wanting to quickly format a text selection in an Evernote note that contained a code snippet. For example:

… when writing a class that implements the IImageProcessor interface …

The quickest built-in way is to bring up the font dialog with Ctrl-D. But the font must still be selected. So then I found this page which led me to do the following:

2. Create a script file, EvernoteMods.ahk, in My Documents. The script contents are:

3. Double-click the script to install it.

Now I can use the Windows Key with N to start Evernote, and also use Ctrl-Alt-C to set the consolas font on a text selection.

I couldn’t quickly figure how to have my shortcut only run if Evernote was running. The example on the comments here didn’t work for me. 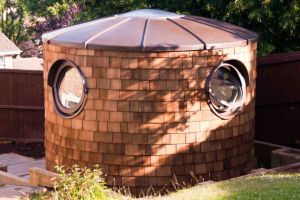 This is my office! It’s a 3m diameter O-Pod office in my back garden. I’ve been working from here for a year now and it’s excellent.

Below are some photos of the work I did making the concrete base and the assembling of the pod. The base took me and a friend around 3 weeks, in spare time, to put together. We had to shift a load of top soil because the garden is on a slope, then lay around 6 inches of hardcore, then the concrete. This was all surrounded by a retaining wall made from sleepers.